October 19 Vladimir Bobrovnikov, Ph.D. in History, a research associate of the Institute of Oriental Studies of the Russian Academy of Sciences at St. Petersburg State University gave a lecture and held a seminar фbout Muhajirism and the State Regulation of Islam in the regions of the Russian Empire. Among the participants were undergraduate and graduate students studying at the program of training specialists with in-depth knowledge of the history and culture of Islam.
The topic of the lecture is “Interregional Relations of Islam in the Context of the 19th Century Colonial Empires Muhajirism from the Russian Caucasus to the Ottoman Empire” met the genuine interest of students.

In the history of the North Caucasus in the XIX century there are two key and difficult topics – the Caucasian War and the massive relocations of the war and post-war time. The second topic, as noted by V. Bobrovnikov, is associated with the processes of Muhajirism. Muhajir – from the Arabic “immigrant, emigrant” – was a term used for mountaineers who were forced to leave the Caucasus after the end of the Caucasian War, giving up their lands to the Cossacks and the Russian immigrants. Despite the fact that more than 150 years have passed since the moment of the eviction of the Highlanders, this topic is perceived today in the North Caucasus rather painfully. Especially emotionally related to it in the North-West Caucasus, the majority of the mountain population of which left the Caucasus and Russia forever, moving to the lands of the Ottoman Empire. During the lecture, Vladimir Olegovich explained the importance of Muhajirism for the historical memory of North Caucasians and analyzed the main works written on this issue.
The seminar was devoted to no less topical issue of the State regulation of Islam in the regions of the Russian Empire and comparative study of the Caucasus and the Volga-Ural region. V. Bobrovnikov told about the Russain Empire harmonious and complete approach to the system of control of non-Orthodox subjects in the era of the Great Reforms, mentioning the importance of understanding the principles of the founding and functioning of the institutions that oversaw the Muslim regions of the empire: Orenburg (OMDS) and Tavricheskaya muftis, which were close to Ministry of Internal Affairs in St. Petersburg. The Muslims of the North Caucasus were considered under the jurisdiction of the OMDS. Vladimir Olegovich also gave a detailed account of the creation of the Department of Spiritual Affairs of Foreign Confessions (DDDII) under the Ministry of the Interior in 1832 , which remained an essential part of the ministry until the revolution of 1917.
After the lectures and the seminar, Vladimir Bobrovnikov answered the numerous questions of students and teachers of St. Petersburg State University for a long time. The fruitful discussion lasted more than three hours and left no one indifferent. 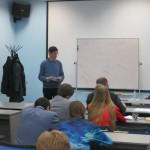 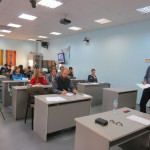 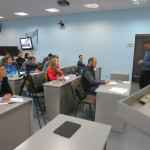 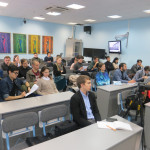 News on 20.10.2016.
← Academic Exchange Experience Perspectives for the development of training programs for specialists with an in-depth knowledge of the history and culture of Islam →